Aliya is now two-years-old.  I am the mother of a two-year-old.

Aliya’s second year of life (and our second year as parents) has felt vastly different from Year One.  Year One, particularly the first couple months, had its share of challenges.  Kevin had just begun his new post as an assistant principal, and he had a very shell-shocked, depressed wife and new mom at home.  We had absolutely no idea what we were doing.  Does anyone, really, when they have just brought a home a tiny six-pound human being home for the first time?  Whoever said taking care of puppies was adequate training for those aspiring to become parents probably never had children.

But Year One came and went.  All the while, baby grew and grew, and was healthy and as happy as can be.  Once she learned how to smile, she never stopped, and neither did I.  It took her about seven weeks to learn how to do it, but once she figured out how to turn up the corners of her mouth, I made it my mission in life to capture every smile and funny face for all of my social media outlets because who wouldn’t want to see a picture of my kid?  Maybe now that she is two, I’ll refrain from posting a daily photo with the caption, “BEST KID EVER.” 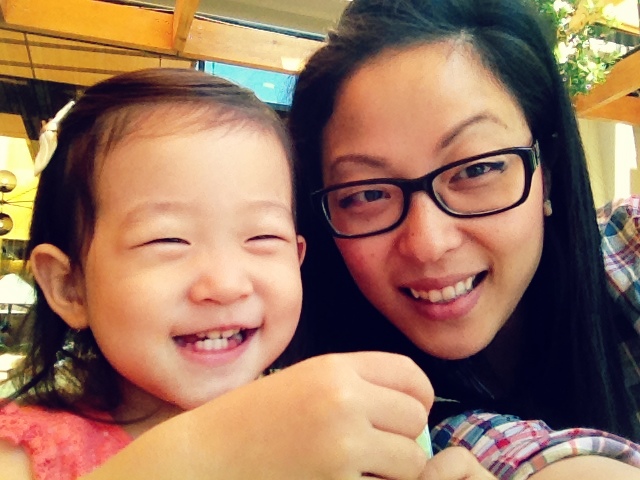 They (and by “they,” I mean my therapist) say it takes time to build a relationship.  In the early days, I could not think straight.  Not sleeping will do that to you.  I would stare at her and just think, “I don’t care what you do in life.  Just sleep.  Please sleep.  Nothing would make me happier or prouder than a five-hour stretch of sleep.”  And eventually she did.  And we were able to begin growing that relationship they talk about.

When Aliya turned one, I cried in the last weeks leading up to her birthday because I was sad that my baby wasn’t such a baby anymore.  But I remember a good friend of mine telling me there was much to look forward to, and there would be even more joy, more laughter, much more to come.

Year Two has come and gone.  I have feared the Terrible Twos since before I was even with child, and though Aliya has become more willful and challenging at times, she has also become so deliciously sweet, incredibly affectionate, hilarious, nurturing, charming, and a master imitator.  If you ever want to become painfully aware of the things you do and say throughout the day, live with a two-year-old.

Every now and then, she’ll really impress me.  Tonight, for example, we asked her to choose, “Do you want to play with your piano, or watch your show?”  Her response:  “Yes.  Pia-show.”  Brilliant, kid, but no dice.  Seriously, where does she come up with this stuff?

Unlike last year, I did not cry these past few weeks.  I have been slightly more excited (and less sad) to celebrate my little girl growing up.  We invited all of her friends, and she was so happy to see them and play and eat cake since these, of course, are all the elements of a great birthday party:  friends, play, and cake.  Today when we told it was her actual birthday, she began singing the Happy Birthday song and then kept saying, “Aliya’s Birthday?  Happy Birthday cake!”

We shared the perfect day together (not without its share of tantrums and time-outs), eating and doing all of her favorite things.  Happy 2nd Birthday, dear Sassafras.  I hope you always know how much you make Mommy and Daddy’s hearts explode.  Thank you for turning everything into a song or dance party.  You rock.